If Fox makes a spin-off of "Bones" starring Emily Deschanel without makeup, they should call it... 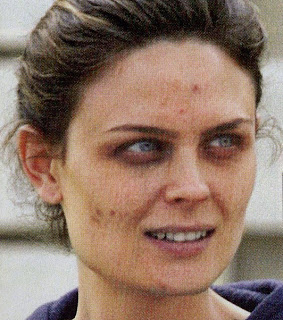 Yeah, it's an actual candid paparazzi photo from this week's In Touch Weekly Magazine.

I think that is for the show bones, not in actually her without make-up.

she looks GORGEOUS no matter what

EMILY IS SO FREAKAING GORGEOUS AND EXTREMELY CLASSY!!! WHICH I LOVE! SHES THE ONLY DECENT CELEBRITY LEFT IN THE WORLD! WAY TO GO EMILY! AND THOSE PICTURES ARE PROBABLY JUST A THING FOR BONES. I LOVE BONES ITS ROCKS!!!!!!

omg she had a bad day, who cares im sure we have all had one. even if its not and she looks like that all the time who cares? we only really see here with make up on anyway.

It's exactly what it seems. A make up for the tv show 'Bones'. I just don't remember the episode, but can tell you this is a make up.

Im sure that this is photoshop!

Lame comment about the 'brains', Paula!
Guess you ran out of inspiration

I think than she's cool anyway. I had a bad day too. I she allso got a good personality :)

This just proves that Emily is the same as the rest of us. I don't see the problem. She's amazing! x

It's obvious she's a very attractive woman, personally I think she's one of the most beautiful women I've ever seen and mostly even more beautiful when she's natural and casual.

And she doesn't only look great, but also has a great personality.

thats totally fake.
there are more pictures of her without makeup.
and she looks nothing like that.

Actually, this is a picture of her taken on the set of Steven King's "Rose Red" She first played one of the students, and then when the house kills her, she came back to play a zombie-thing at the end. You, peoplepaula, need to get your facts straight. Emily Deschanel is a beautiful woman. She frequently goes with little makeup, and looks gorgeous either way. Good luck with your reputation.

It's EXACTLY what the person ("K") right before me said...she was in the movie Rose Red and was made-up to look that way.

This must have been photoshopped because she's been seen a ton of times without make up and she definitely doesn't look like that. She has beautiful skin. Also, it that image can't be from Rose Red because she was blonde in that movie.

Ok I know that this picture was either doctored or for a show or movie. Emily doesn't have blue eyes, she has light green eyes.

wonderful, sometimes there are a lot of people who believe they are ugly but the only thing is that you have bad thought about you.