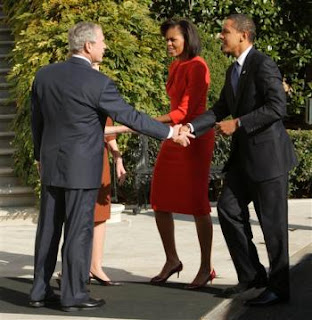 What's with the handshake?

You can see he dont wanna shake his hand by his face.HE probably mad cause BK toke his job and he gonna be working at burger king

Hmmm or maybeeeee the shot was taken a split second before Bush's hand completely closed and it's somebody's way of screaming racism again...which by the way voting for someone because they are black is racism too. Read a book. Geez people. Maybe we should post more of the VIDEOS of Obama NOT saluting than stupid obvious crap like this! lalalala singing "And it makes me wonder"

Here is something funny.....for all the folks that "worried" that Obama might be the antichrist.....he is being driven by an armoured cadillac limo to the upcoming inaguaration that is referred to as "The Beast". lmao Oooh wonder if it has the presidential seal on it?