Why is B.J. Novak still in the opening credits of The Office.... 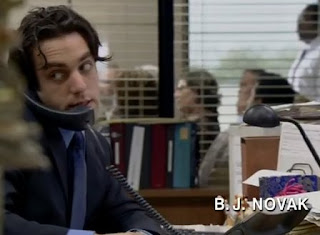 When he's barely on the show?

I should visit your blog more often. You crack me up. :)

And yes, I wonder why they don't update the opening credits for the Office, too...

I am so glad someone else noticed this! I HATE IT! I dont care if he is a writer or a producer, he is barely on it! Get him off the credits!

well i like him there. i think he is pretty hot and i like o see him since he isn't on there that much. but he is coming back alot in the new episodes so thats good. :)

I have been watching the show since the beginning and have constantly wondered why he is in the opening credits. My assumption is that because he is a producer/writer he can demand to be in the credits. I for one think he is a fine actor, but his character does not deserve opening credit status.

OMG!! I've wondered the same thing! He is a minor character it just seems stupid & petty that his name is on there. As for his acting, definitely not one of the better ones!